November in the North Yorks Moors. The heather has long gone and the bracken has died down to a deep golden brown, glowing in the low winter sun. The sky is cloudless and a deep blue [we’d expect nothing less…ed] and the place is deserted. It is of course Tuesday. We’ve arrived in Goathland to try out a new walk. Goathland came to fame as the fictitious Aidensfield in the TV series “Heartbeat“, a slow burning tale of  the Yorkshire police in the 1960s. Cue to get out all those 1960s fashions [well, what passed for fashion in North Yorkshire in the 1960s, and it wasn’t much different to the 1940s, 1930s etc etc] and feature as many beautifully restored 1960s classic cars as possible. We’re not sure quite what defines a classic car – the vintage period ended in 1930 – but HMRC classes cars over 15 years old as classic, and those made before 1976 are exempt from vehicle tax [we still like the term Road Fund Licence]. About 25 years ago we carefully restored a 1966 Triumph TR4A, reimported as a wreck from California, and used it for fifteen magical years. The famed Northern TR Centre helped enormously with the restoration [i.e. took lots of money but gave it a great paint job which lasted unblemished for 15 years]. It too was used for filming, but not in Heartbeat thank goodness, even though it had the correct local registration. Come to think about it we had lots of suitable vehicles – grey Austin Minivan [bought for £75, scrapped and worth a fortune now], Rover 2000TC and a Morris Minor Convertible.

Goathland milked the TV fame for all it was worth and still does to this day – the only people we saw on our walk was a coach party as we arrived in Goathland at the start. They didn’t look equipped for a tramp across the moors. Heartbeat ran from 1992 to 2010, a remarkable total of 18 series. We sold the TR4A in 2005 and, as a last sentimental journey, we headed across the North Yorks Moors and, by chance, passed through Goathland. It was a fine Saturday in September, Goathland full of “Heartbeat” enthusiasts so we parked the car outside the Gothland Hotel [Aka the Aidensfield Arms]. No-one took the slightest notice.

The Goathland Hotel has built itself quite a reputation – you can read a bit about its hospitality in the blog “A brand day out“.

We left our car at the Mallyan Spout Hotel, and slipped down the little path at the side of the hotel to start our walk by a scramble to see the Mallyan Spout, a waterfall in the deep valley of the River Esk. The walk was stunning – a real mixture of deep valley, woods and open moorland – this range of scenery is often found on walks in both the North Yorks Moors and the Yorkshire Dales, each walk a series of magnificent views. The Mallyan Spout is ideal for a post-walk snack as [1] it’s in the right place at the end of the walk and [2] it serves food from 12:00 to 20:30. As our finishing times have a habit of being a bit variable, it suited us perfectly. The Crab and Lemon Mayonnaise sandwiches were off, but Tuna Mayonnaise was a good substitute and the Wild Mushroom soup was, well, as good as the King’s Head in Kettlewell and, more importantly, as good as our home-made; and that’s praise indeed. Next time it’s a sentimental return for lunch at Beck Hole; if you’re thinking of moving to North Yorkshire [Resident’s visa application all completed?] then Beck Hole has to be on the list. You can even get a “00” model of the pub to go with your train set featuring the North Yorks Moors Railway… 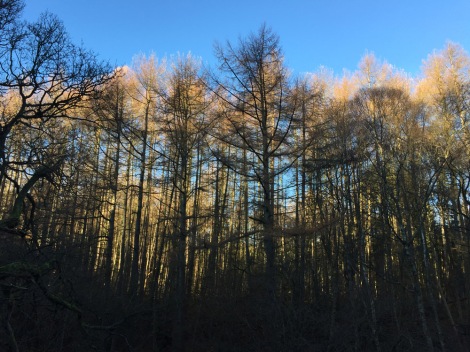 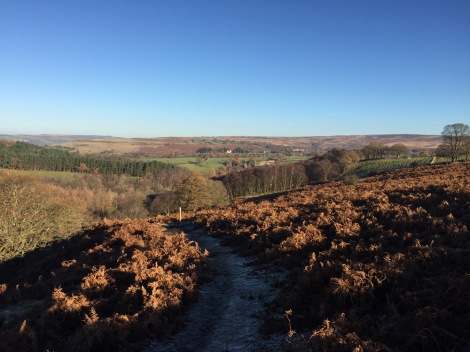 Stepping stones along the walk 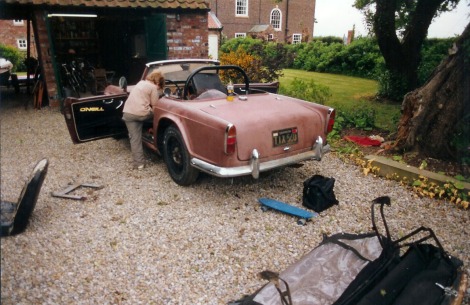 The TR4A before restoration… 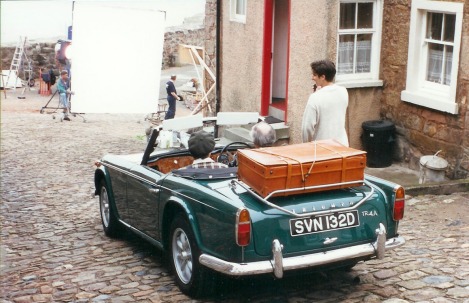 …and after. Filming smoked salmon adverts at Crayle, Scotland