Wow, Cornwall is a long way from Yorkshire. Well, to be fair, it’s a long way from anywhere. We were forced to break the long trek at the Queensberry Hotel in Bath on the way but, when we arrived it was well worth it. Currently the BBC is showing the resurgent Poldark with the brooding Aidan Turner [look out Mr D’arcy] as the man himself with Twitter [what?] apparently exploding after Poldark went topless to do a bit of gardening. Unfortunately, the new series didn’t come quite soon enough to save the Poldark Mine Experience in Cornwall, which had been celebrating the local fame since the last series was aired between 1975 and 1977, but finally went into administration in March last year.

So, a few days of rest and fresh air including a trip down memory lane to the Ship at Porthleven and, the highlight of the visit, the Weelhouse in Falmouth. Now, call us old-fashioned, but when you start a business the general idea is to bring in customers and that’s often achieved with a bit of advertising. There are a few places that aren’t that keen apparently – Sa Qua Na in Honfleur, where the locals complain that too many visitors are taking up the tables, and the Shoe Shop in London. Similar story here in Falmouth, where the Wheelhouse only has so much fresh seafood that when its gone, its gone. And it goes rather quickly with bookings needed several weeks in advance. And it’s not yet summer.

Simple excellent fresh seafood, chalked up on the board with little numbers telling you, for example, how many lobster or crab they have left. Lobster, crab, mussels, prawns, oysters, chips – what more do you want? Good inexpensive crisp white wine and good bread, that’s what you want, and it’s here aplenty. We went with some local Cornish friends – £120 for four with two bottles of wine and three courses. Down a little side street – Upton Slip, which goes down to the harbour.

Not to be confused by the one in Megavissey – which might also be excellent but we haven’t been. 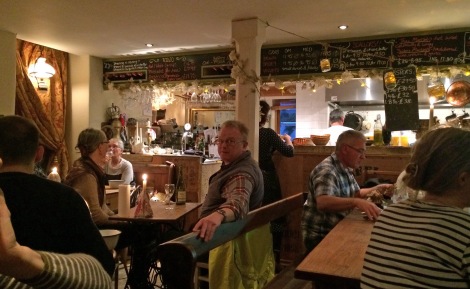