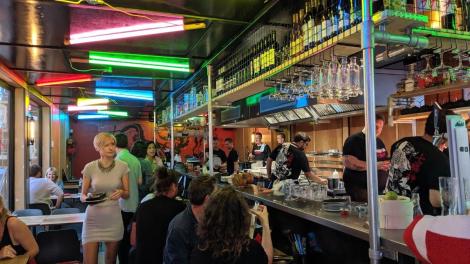 So, can it really be two years since we wrote this post and left it languishing right through the Great Covid Disaster? Yes…it can. It’s clear that Bristol has become the foodie destination. More so because it does wonderful, imaginative food at sensible (low) prices. Yes, you can eat for under £20 – under £15 even – for three courses.

Jan Rayner featured Marmo, and listed a whole lot of other restaurants where good, cheap food is in abundance. We’re reliably assured by friends who’ve been going for ages that the Sunday lunch at the The Bank Tavern is great; they’re just a bit pissed that, with its newfound fame as OFM Sunday lunch of the year, they can’t get in until 2023. A bit like the Black Swan at Oldstead when, having been named Sh*tadvisor best restaurant in the world, they had to unplug the phone. And, incidentally, we see they’re No 14 this year – still only just behind Adams in Birmingham representing the UK. Still going to be difficult to get in.

Bristol, like other cities, is expanding. Tower cranes grace the skyline and the area around the docks filling with apartments and all the necessary stuff that goes with them. Gyms and food places. A group of containers was plonked down, two stories high, to act as a temporary home for the food places, and a handful of shops. Intended to be temporary pending rehousing in the new apartment development, they’ve rooted themselves firmly in the Bristol culture and look likely to remain as a permanent feature. Although temporary, they’re likely to survive as long as the apartment blocks, if modern (shoddy) house construction is anything to go by.

Six of us are eating at 7 Lucky Gods, a Japanese fusion tapas restaurant (?…Ed). The 7 Gods really are dead lucky, because they’ve been reincarnated as cocktails (very tasty). The advice is to order around 5 dishes each so, with 6 of us, we pretty much covered the menu. And we ordered several cauliflowers. And Chicken Katsu curry arrancini. And fries…

Seven Lucky Gods is the latest opening from Bristol restaurant group Hyde & Co, offering laid back all day Japanese style food and drink, inspired by the Izakaya bars of Tokyo. Enjoy a pint of ice cold Asahi on the sun terrace or try one one of the expertly created cocktails and stay for sushi, yakitori and Japanese style tapas to eat in or takeaway.

Good beer – it’s more ‘appropriate’ than wine – but we missed out on the puds, having taken our server’s guidance on a few extra savoury plates. Next time please can we have the Wagu beef special main course – £22. Altogether a taste sensation and great location. BTW if you need to go to the loo, it’s down the metal stairs to a code-locked one on the ground floor. C6790, if you’re caught short when in the area. At least it was in October 2019! £155 for six of us.

…and another thing. We stayed at The Queensberry in Bath – see the review on The Olive Tree, their in-house restaurant for details. 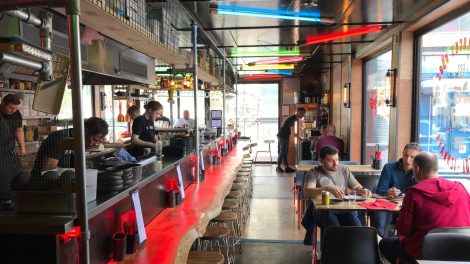 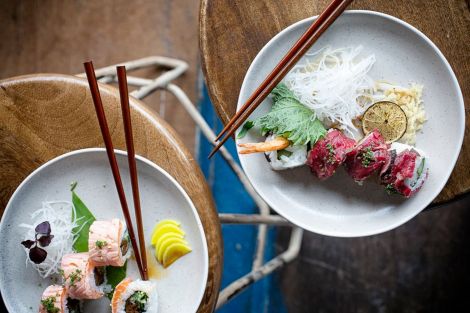