Now for something completely different, as Monty Python used to say. Remember them? Saigon (to the people of the south – Ho Chi Minh to the northerners) is vibrant. Very vibrant although there are still plenty of building opportunities, inevitably as a result of the war. There’s still a huge amount of history – from the French through to the Vietnam war. We restrict our architectural tour to a few famous wartime spots.

The Post Office, built in colonial style and architecturally interesting (though not in the same class as Otto Wagner’s in Vienna) was where foreign news correspondents used to go to ring in their war reports to agencies across the world. A series of clocks gives you the local time in world capitals just in case you didn’t want to wake your editor’s beauty sleep with another bombing report.

Next up drinks at the Rex. Here were staged the “Five o’clock follies” where reports were briefed to journalists by the government on their stunning victories. And you though that madman Trump invented fake news?

In the privileged expat world of the city centre, and in particular on rue Catinat (modern Đồng Khởi street), still at that time the epitome of colonial chic, Graham Green wrote The Quiet American. Greene is known to have taken a daily constitutional up this street,

to where the hideous pink cathedral blocked the way.

Incidentally, the hotels are great staging posts as you walk around the city. Wander in, take a rest, use the bathroom – they all welcome visitors with no need to buy anything.

Final bar crawl sees us in the rooftop bar of the Caravelle Hotel for happy hour. During the 1960s The Caravelle was home to the Australian Embassy, the New Zealand Embassy, and the Saigon bureaus of, NBC, ABC and CBS, to name but a few. Apparently you could sit here, listen to the ward getting closer and file your report over a whisky and soda. The rooftop bar has changed little since its opening in 1959.

We’re in the Hotel des Arts, a rather international hotel with 24 floors. Well actually 25, which is the infinity pool on the roof, a little scary for those of us with a healthy disrespect of all things more than 3 feet [905mm] off the ground. There’s even a glass bridge from the pool deck to the adjoining building. No thanks. We’re upgraded to a Sky Executive Grand Deluxe Room, on the 22nd floor. One of the best, apparently. Still, when you look at the prices, they’re equivalent to staying in a rabbit hutch in London. Being international certainly helped the breakfasts – a whole floor with every possible combination to suit every taste. We love breakfast. Not as good at the Metropole in Hanoi, but very, very good.

PS we had a great lunch at Chi Hoa. Just make sure you end up there, not next door where you sit like dummies until you realise it’s a massage parlour… 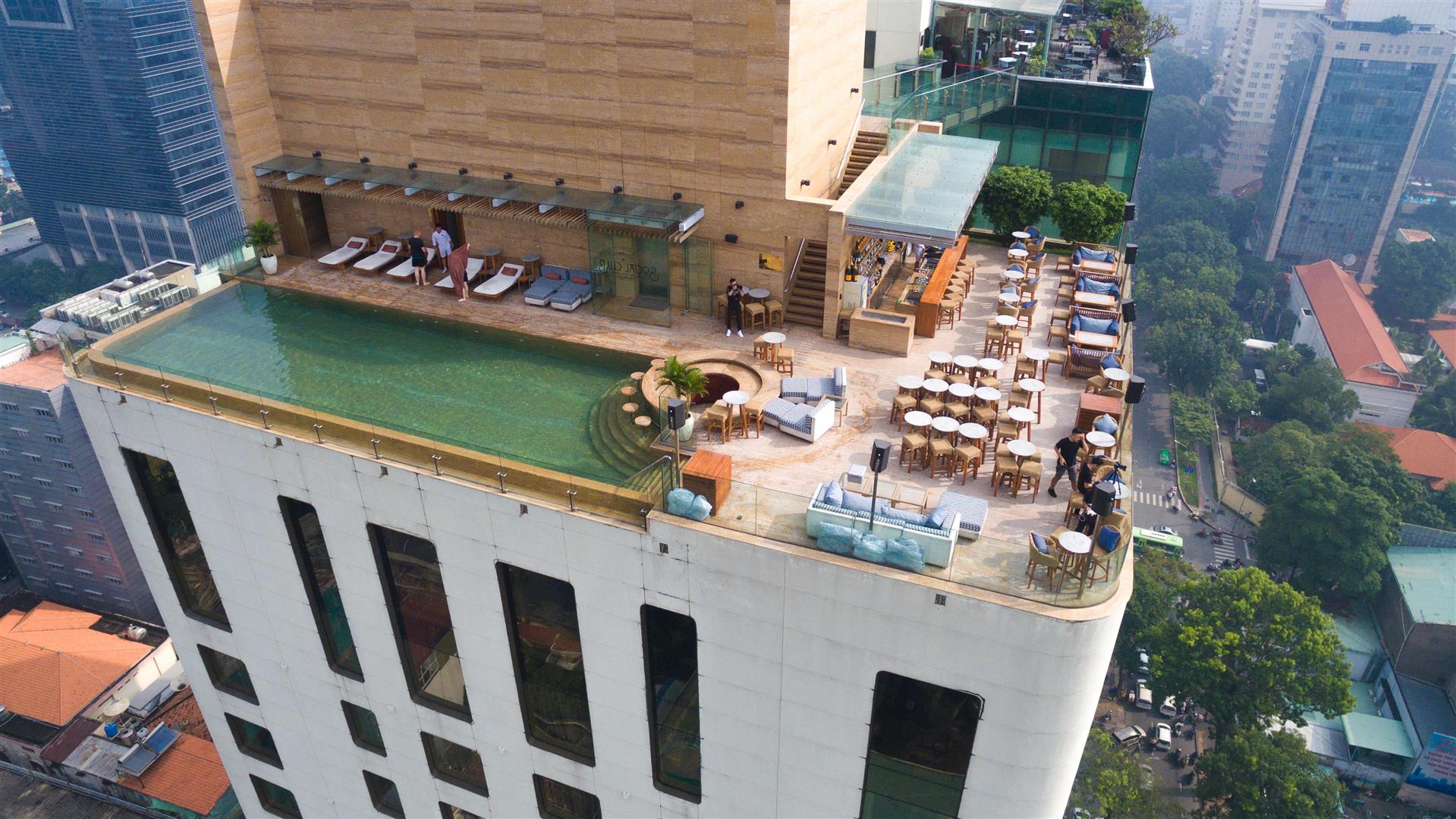 …the rooftop bar and glass bridge on top right

…bread pudding and creamy custard for breakfast. Well, you just have to.

Make sure you get the right entrance door…

Yes, the food was this good at Chi Hoa…Nice bowls too. Conran Shop?

The bar at the Rex…