Britain (and America) is permanently in love with Georgian architecture. It seemingly evokes a period in which we would all like to live. Beautiful buildings, fabulous fashions, all simple and achingly romantic. Think Bath, for example, or the Edinburgh New Town. Of course, there was no NHS and medicine and dentistry a little primitive and almost certainly very painful, with little in the way of running water or sewerage. The National Trust loves it. No matter when a property was built they seem intent on restoring it as it was at 5pm on the 31st March 1825 (or thereabouts), just in time for scones and jam, and coddled eggs in the nursery wing.

So there’s a period towards the end of the Victorian period and prior to the beginning of The Great War, roughly 1890-1914, that seems to have been forgotten in the headlong rush towards the post-war Modern Movement. The MM was all about simplicity, soft curves, shining white buildings with slim Crittall windows. The birth of a whole exciting period of architecture that, with a couple of stammers (the 1979s red brick, doily and dado rail period where Laura Ashley briefly burned bright), lead to the celebration of contemporary architecture showcased by Kevin on Grand Designs. Wonderful; inspiring. Unless you live in Hambleton of course, where if it doesn’t look like a badly assembled Bayko building set it’s not permitted.

So, this lost period is loosely known as the Arts & Crafts movement. The start and end dates, and the proponents and participants are somewhat loosely defined but began with Giles Gilbert Scott and progressed to include William Morris, Philip Webb, Edwin Lutyens, Gertrude Jekyll, Charles Voysey, Hugh Baillie-Scott, and continued as it morphed into the twentieth century to include Adolf Loos (bet you don’t know who he was), Le Corbusier and Frank Lloyd Wright. Even Mies Van Der Rohe. Truly a movement encompassing a vary varied range of styles but an essential link as architecture transformed from high Victoriana to today. The style embraced Socialism (for some) and the rediscovery of craft working – just how the now famous William Morris & Co started – and, years later Laura Ashley. The Bloomsbury Group had a hand in there, too, as a parallel group of artists, writers and general know-alls. There’s a restaurant just opened in London, called Muse, that would be right up their street, as it were.

Included in the list above should be Charles Rennie Mackintosh, sitting roughly between Baillie-Scott and Lutyens, whose unique style found only modest favour and he, and his wife Margaret, died penniless and initially forgotten. His few buildings were largely ignored, apart from a few enthusiasts, and even Glasgow University demolished his house – though not before a far-sighted Andrew McLaren Young, Professor of Fine Art at the University, instigated a measured survey and photographic record of the house, and stripped out the principal fittings for use in a future reconstruction. Prior to that the house had been acquired and saved by William Davidson, for whom Mackintosh had designed ‘Windyhill’.

Perhaps his best work is Hill House in Helensburgh – the seaside town itself a repository for many significant pieces of architecture, including by Hugh Baillie-Scott – which was built for Walter Blackie. A sumptuous design, clad in white render, it both evokes the strong Scottish baronial clan defensive castles, whilst pointing optimistically towards a new 20th century architecture – just like his house at 78 Southpark Avenue. Truly the architectural missing link as one century ended and another began. Owned by the National Trust for Scotland it’s recently been completely covered in a chain-mail shed by Carmody Groarke, to allow the optimistically (I.e. poorly) detailed external walls to dry out. There are walkways all around, at high level, so you see where the external render is breaking down [yawn…ed] and enjoys the views out over the town to the Clyde.

To protect the Hill House, we’ve embarked on a pioneering conservation programme. The first stage has seen the construction of the Hill House Box, a protective steel frame structure covered in a chainmail mesh designed to protect the house from the rain. This will allow the walls to dry and prevent further damage.

It’s a ten year plan – that probably means for ever. Do visit – it’s now open all year – and you can get a very pleasant lunch, together with cakes decorated in the style of Margaret McDonald, Mackintosh’s wife. And don’t forget to save up to buy the Lego model of Hill House… 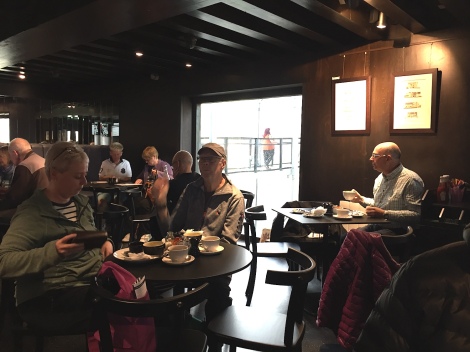 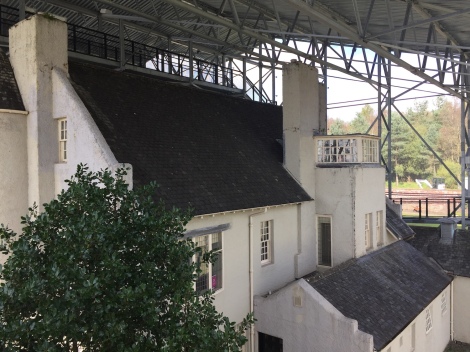 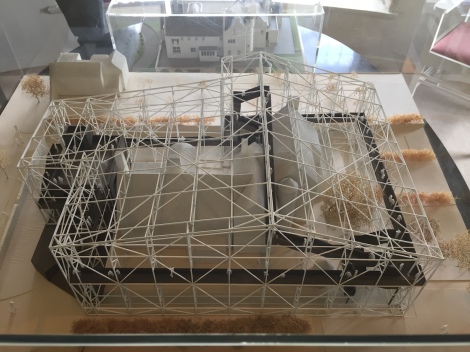 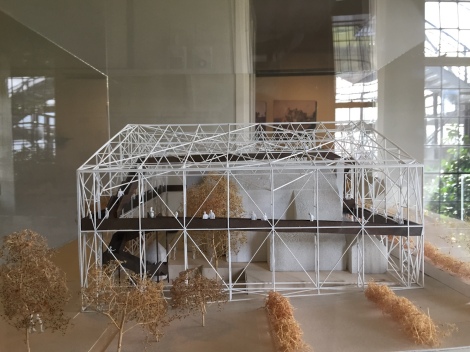 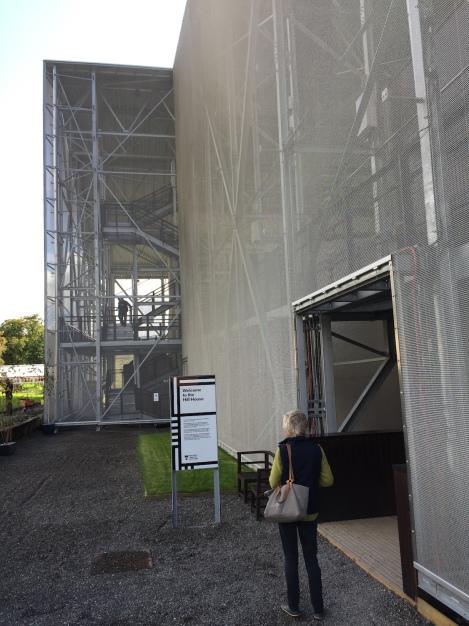 …and the house under construction, first time round