Remember the Queen’s Silver Jubilee weekend in 2012? She and Phil have to put up with a lot, travelling everywhere, always having to appear happy and cheerful no matter what the company, event…or the weather. Well, the day of the stately procession of 1000 ships that made up the Jubilee flotilla down the Thames proved that, since King Canute tried in 1028AD, you can’t control the elements, whoever you are. What should have been a glorious summer’s day turned out to be a succession of rain, wind and probably hail, locusts and snow. Although the flotilla broke all records for its length [previous record of 327 boats in Bremerhaven, Germany], the crowds – and the monarch – were soaked and frozen. And it wasn’t just London…

“It’s a washout,” said a woman regular at the former Red Lion in Otley, where all 17 of the small town’s pubs have renamed themselves The Queen Elizabeth until Wednesday. Outside in the downpour, knots of children with Union Jacks scampered around a soaked stage set up for a family party in the Market Square.

Almost everywhere the routine of “if wet, in the village hall” rang out. Even the great Sainsbury’s, for the Jubilee Family Festival in Hyde Park, ran up against opposition – presumably people would have been happy to queue if the sun had shone…

We are very sorry to hear that a small number of people did not enjoy their day out with us yesterday. Overall we’ve had great, positive feedback about the vast array of entertainment on offer to celebrate the jubilee. There will inevitably be some queues at an event of this size with 50,000 people but we’ve worked hard with the organisers overnight to avoid any similar issues today.”

Now, there was a little place that shall be forever England, that basked in glorious sunshine. And, amazingly, it wasn’t Yorkshire. We’ve had some memorable trips with friends but this time we, en famille, were away for special birthday celebration at Holbeck Ghyll, just up the hill from Windermere. No, we didn’t just do it to avoid the Jubilee, but there wasn’t much evidence of it around here – save for the Union Flag flying at the hotel. Holbeck Ghyll is a relaxed, very comfortable country house, with a rather splendid restaurant. Rooms where you sink down in squishy sofas, perhaps with a glass of wine or one of their 50 odd whiskeys. Small children gleefully catered for, with high tea served and no complaints about the fish goujon remains on the carpet. Mind you, there weren’t many remains – small children have stunning appetites.

In addition to the rooms in the main house – which we think are the nicest to stay in – they have a collection of other properties in the grounds of varying size. Not cheap, but the food is excellent. And you can watch the helicopters landing in the field at the Samling down the way…about which more later.

…and the blow-by-blow account of the great Jubilee Flotilla as it happened.

Comfy and squishy…arts and crafts at its best 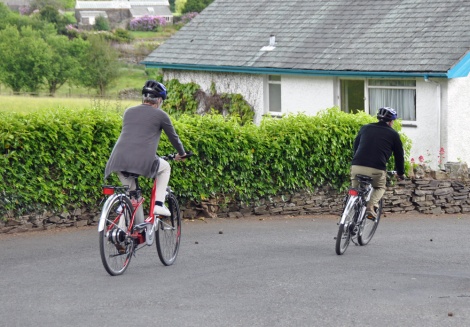 …but there are downhill bits 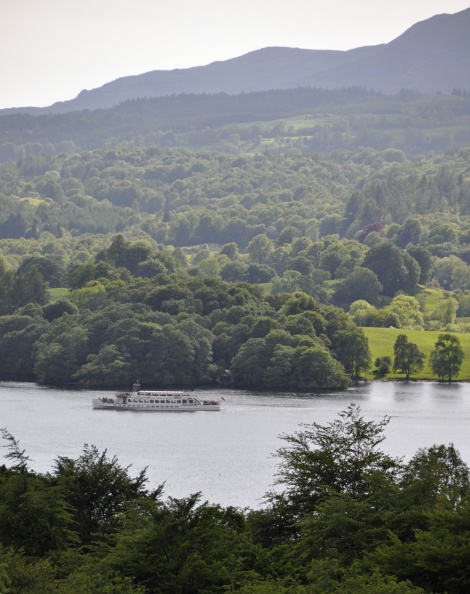 Views across to Windermere